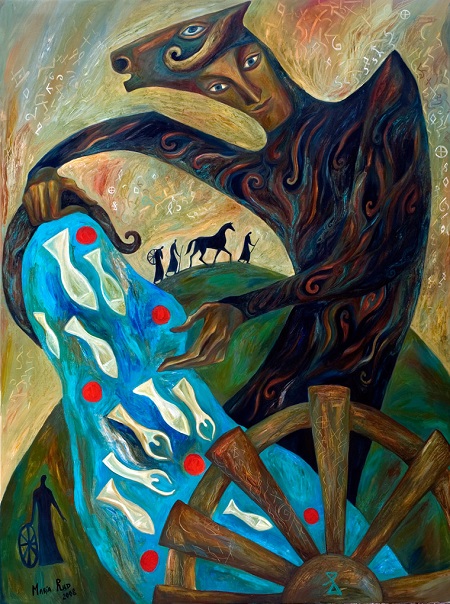 Maria Rud, a Russian artist based in Edinburgh, along with sculptor and partner Ewan Allinson, have won a legal case against the Swiss gallery, Galerie Zabbeni.

In 2012, Ms Rud and Mr Allinson were invited by gallery owner Andrea Zabbeni, to exhibit over 30 original works of art and sculpture at the gallery in Vevey.

In late 2013, however Mr Zabbeni was declared bankrupt and the paintings were seized by the Swiss authorities.

They claimed them for the benefit of the creditors of Mr Zabbeni’s gallery business, including the gallery’s landlord.

Balfour+Manson were instructed by Ms Rud, in June 2014, to take steps to recover the paintings and the sculptures, maintaining that the works of art had always been on loan to Galerie Zabbeni, with the exception of those sold to buyers and therefore remained her property.

The Swiss authorities maintained that title had passed to gallery owner, Andrea Zabbeni.

Gordon Deane, partner at Balfour+Manson alongside Swiss firm, Hirsch Kobel, a specialist litigation firm in Geneva commenced proceedings on behalf of Ms Rud and Mr Allinson to seek recovery of the paintings and sculptures.

Balfour+Manson was involved in collating a portfolio of evidence to support Ms Rud’s claim that title to the paintings had not passed to the gallery owner.

The seizure of Ms Rud’s artwork by the authorities raised further issues for other work the artist had been commissioned to exhibit in Switzerland, along with her unique live show of AniMotion.

It was unlikely that the court proceedings would be completed in time for a planned show in Spring 2015.

However, in a u-turn in the court action, the Swiss authorities backed down and agreed that title had not passed to Galerie Zabben, thus abandoning their claims to the property.

However, a new challenge was brought from the landlord of the building in which the gallery was housed.

Mr Deane said: “Under Swiss law, in certain circumstances, property can be seized by a landlord in order to satisfy unpaid rent.

“However, in this case, we successfully challenged the landlord who subsequently decided not to pursue any claim in respect of the artworks.”

Ms Rud said: “I am delighted with the final outcome, Gordon and the team in Switzerland have successfully resolved a very difficult and stressful situation which could have dragged on for many months preventing me from continuing with my other planned shows in Switzerland.”